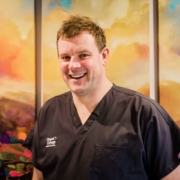 Ben graduated from Liverpool university in 2001.

He prides himself on having a calm assured manner and providing the best possible care for patients.

Having spent several years working in a busy NHS practice Ben became involved in the training of newly qualified dental students as a Vocational Trainer in the Mersey Deanery. This has greatly helped him to keep up-to-date with the ever changing techniques and materials used in Dentistry.

Since then extensive work in a mixed practice has developed his knowledge and skills needed for more complex private treatments whilst still having his focus mainly on prevention.

Ben lives in North Wales with his Wife Sarah and 3 young Children. He relaxes by playing guitar and is a self confessed “sportaholic” with a
particular love for cricket and rugby.

Eleanor qualified at Leeds Dental Institute in 2000. After graduating she expanded her Oral Surgery experience by attending Halifax Hospital to complete a post graduate course in the removal of impacted wisdom teeth. After a few years working in general practice in West Yorkshire, Eleanor and her husband Paul decided to expand their horizons and set off on an around the world trip. Whilst in Australia they gained experience working in a Community Clinic. On their return to the UK they quickly settled and Eleanor has worked in general practice ever since. Eleanor joined the practice in 2011.

Eleanor has completed advanced restorative and cosmetic courses. She continued her education and became a member of The Royal College of Surgeons on completing the MJDF Post Graduate Examination in 2009.

Due to requests in Eleanor’s previous practice, she trained in facial aesthetics. This treatment involves the facial nerves and muscles and as the only profession to learn these areas in fine detail, patients felt it was safer in a dentist’s hand.

Eleanor and Paul have two children and a black Labrador. She enjoys an active lifestyle playing netball and enjoying the great outdoors. She is perfecting the art of being a shopaholic and practising her baking.

This site uses cookies. By continuing to browse the site, you are agreeing to our use of cookies.

We may request cookies to be set on your device. We use cookies to let us know when you visit our websites, how you interact with us, to enrich your user experience, and to customize your relationship with our website.

Click on the different category headings to find out more. You can also change some of your preferences. Note that blocking some types of cookies may impact your experience on our websites and the services we are able to offer.

These cookies are strictly necessary to provide you with services available through our website and to use some of its features.

Because these cookies are strictly necessary to deliver the website, you cannot refuse them without impacting how our site functions. You can block or delete them by changing your browser settings and force blocking all cookies on this website.

These cookies collect information that is used either in aggregate form to help us understand how our website is being used or how effective our marketing campaigns are, or to help us customize our website and application for you in order to enhance your experience.

If you do not want that we track your visist to our site you can disable tracking in your browser here:

We also use different external services like Google Webfonts, Google Maps and external Video providers. Since these providers may collect personal data like your IP address we allow you to block them here. Please be aware that this might heavily reduce the functionality and appearance of our site. Changes will take effect once you reload the page.